Arrival and first look at the Convex SPP's 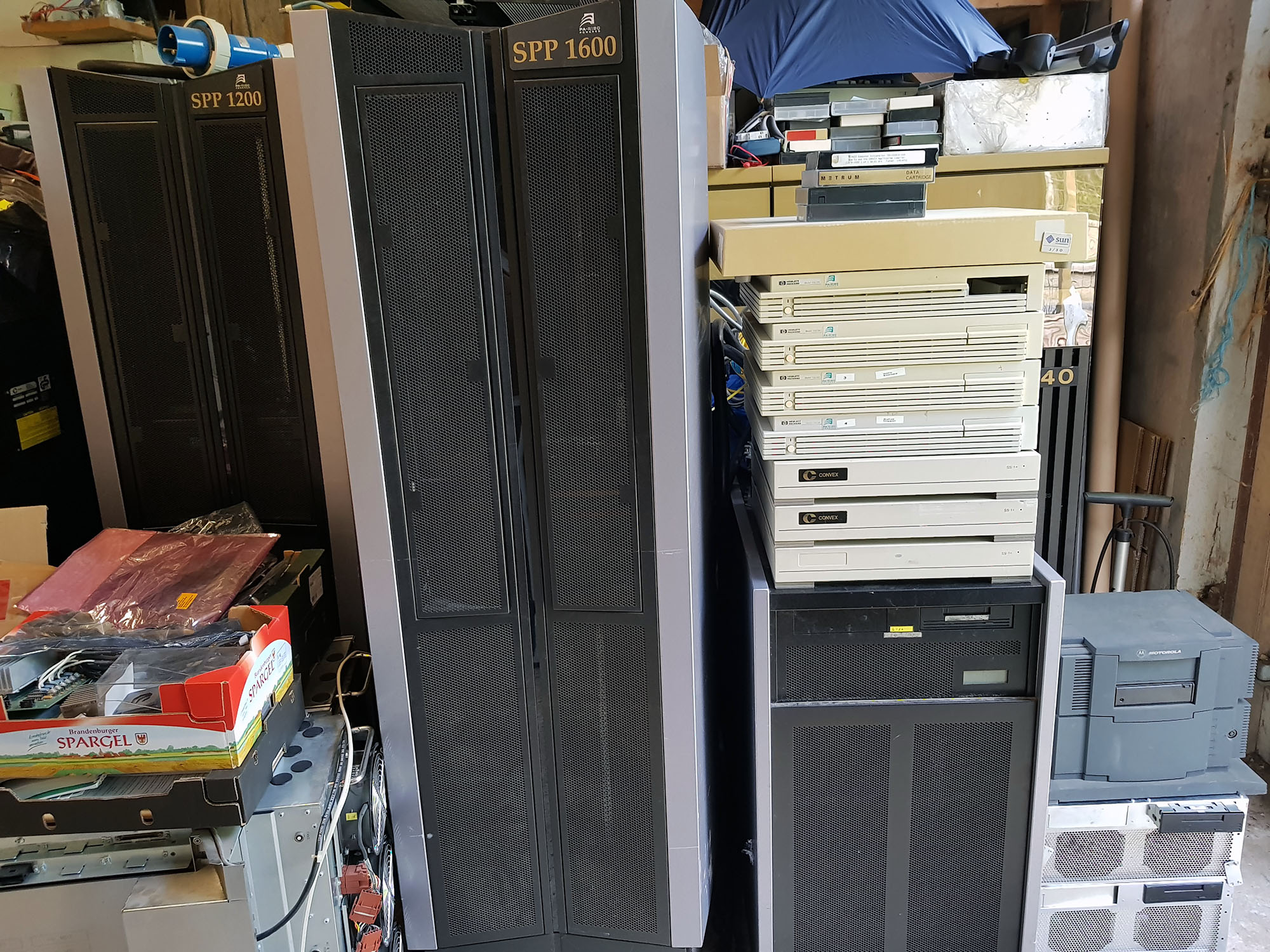 On Friday, the 11th of May 2018, my friend Andreas drove over from eastern Germany to deliver some Convex SPP supercomputers for the Convex Computer Collection.

The SPP-1200's and SPP-1600's are very similar, the main difference being the cache size on the CPU's. The easiest way to describe the architecture, is to show you what's underneath those gray, textured metal skins. The smaller CD models ("Compact Design") open by releasing two latches at the back of the machine, and then flipping the outside of the case upward; the larger XA models ("Extended Architecture") have two curved side panels which are unlocked at the top of the machine and can then be taken off.

On the front of the machines one or two DAT drives can be found, as well as one (CD) or two (XA) alphanumeric LCD node status displays.

A special feature of the XA models are the row of green LEDs which occupies the center of the cabinet in the front, back and on top of the machine. This row of LEDs is entirely user-programmable, and is known as the MOD ("Meaningful Optical Display").

The cabling is visible on the right side of the cabinets. The I/O chassis is connected to the node(s) using SCSI cables, and the nodes are connected to each other using 8 big cables, which carry the CTI (Convex Toroidal Interconnect) Rings.

Each node consists of a backplane, which is populated with a number of large GaAs gate arrays which implement the 5-port crossbar switch. On the XA nodes, additional gate arrays are installed which implement the CTI interconnect which link multiple nodes together. So, the difference between the CD and the XA models is that the CD models consist of a single node, whereas the XA models can have up to 16 nodes (which requires 8 cabinets linked together).

Whereas most other large machines of this era have a serial console port connected to a console terminal to control the operation of the system, there are no serial ports to be found on the SPP's. Instead, every node has a thin ethernet connector on the backplane, which is connected to the MU module. The MU module is a small computer built around a Motorola 68040 processor that controls the rest of the node in terms of initialization, diagnostics, and booting. All MU's in a system (one or more SPP nodes) are connected together through the ethernet bus (called the DaRT bus in Convex terms - Diagnostic and Remote Test), which in turn connects to a dedicated teststation (an HP 9000 model 712/60 workstation). All management of the SPP is done through a number of applications on this test station, one of which serves as the SPP's console terminal.