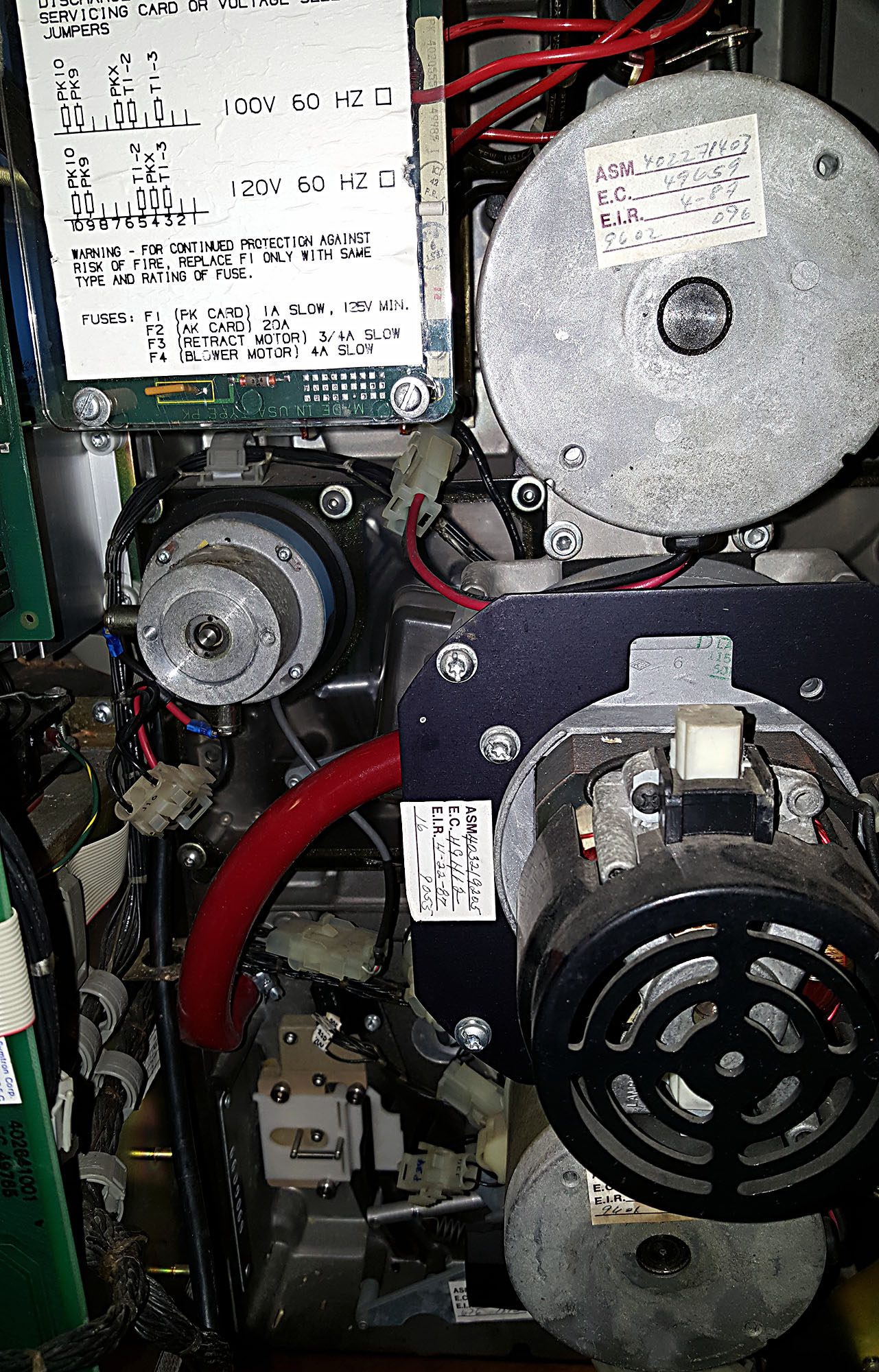 The tapedrive is factory-wired for 100 or 120V; unfortunately, the 200/220/240V version of the drive uses a different transformer, and the 100/120V drive can not be rewired to run on 230V. Fortunately, I do have some step-down transformers, so I'm running the tapedrive from one of those.

First, I needed to fix some obvious damage: the cable running to the front panel was torn a bit (looks like it got stuck between two moving parts); replacing that was easy enough. The tapedrive uses a vacuum blower to create a vacuum to pull the tape up into the tape path and to stick it to the takeup reel. The vacuum hose has become brittle with age, and has broken in two pieces. I ordered some new vacuum hose and replaced it (the bright red hose in the image above). Next, I checked all the power supply voltages, and I checked for ripple, and that all seems fine.

So let's try to turn it on and load a tape.

That's not what it should do. After loading the tape, there should be a bit of moving the tape back and forth (to determine the size of the mounted reel), after which the BOT (beginning-of-tape) light should come on. Instead, the machine check LED starts flashing, and error code F97 appears in the display. F97 indicates a power supply failure. The failure happens right when the tape should reverse direction for the very first time. Using an oscilloscope, I could see that when the motors reverse direction, there is a short, small voltage drop on the motor power supply (should be +/- 26V, drops to about +/- 22V for a few ms).

My guess would be that the cause for this is that the old motors draw a bit more power when they reverse direction than when they were new. So, let's figure out how this voltage drop is detected. It turns out that there's an LM339 quad comparator on the servo controller card that monitors the +/- 15V and +/- 26V lines; it uses two zener diodes to provide reference voltages (one positive, one negative), then uses four voltage dividers (two resistors) to compare the 4 power supply voltages. I thought about a possible solution for a bit, then decided I could probably smooth out the voltage drop a bit with a couple of capacitors, so I put two 10uF capacitors on the inputs to the comparators (after the voltage divider) for the +/- 26V supplies. That slows down the triggering of the fault condition enough to keep the drive going, but should still shut the motors down fairly quickly in case of a more serious problem.

As you can see, the tape now loads just fine. The STC 2920 has a lot of built-in diagnostics. After a slight adjustment of the head, it passes all of these diagnostics. Finally, I reconnected the tapedrive to the controller in the Convex, and ran the SPU diagnostics tests for the tapedrive. These tests take about two hours, and resulted in a complete pass as well.