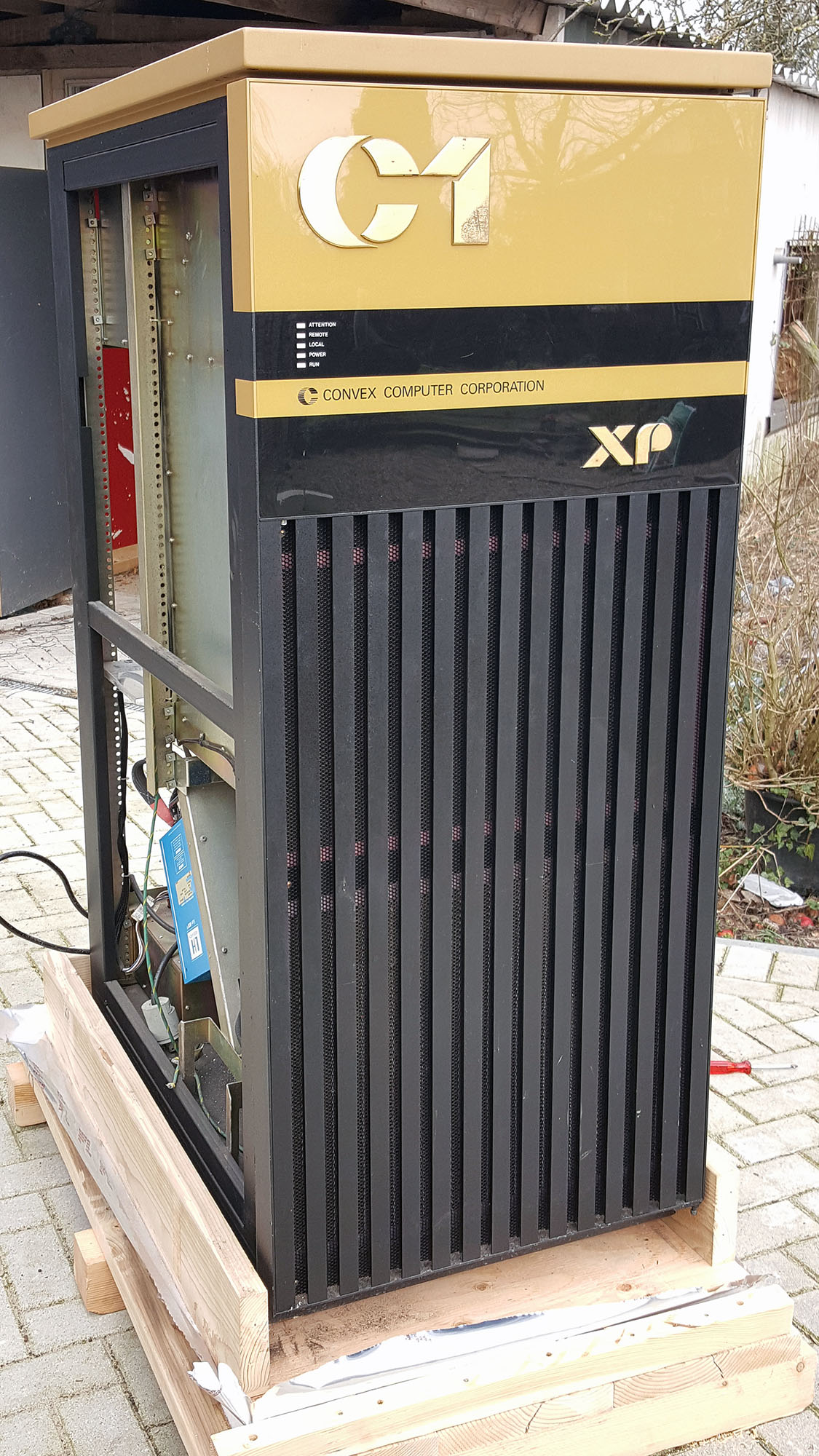 I’ve started working on the Convexes; the first order of business on these machines (after a thorough visual inspection for things like loose wires, bent pins or bulging capacitors) is checking out the power supplies. In order to do so, I’ve removed all boards from both the main cardcage and the Multibus cardcage, and unplugged the power connectors from the SPU tapedrive (and SPU hard disk on the C1 XP). As an artificial load I put a 5 ohm power resistor across the main 5V output. After turning the power supplies on, I check the voltages with a multimeter, and I check for excessive ripple with an oscilloscope. 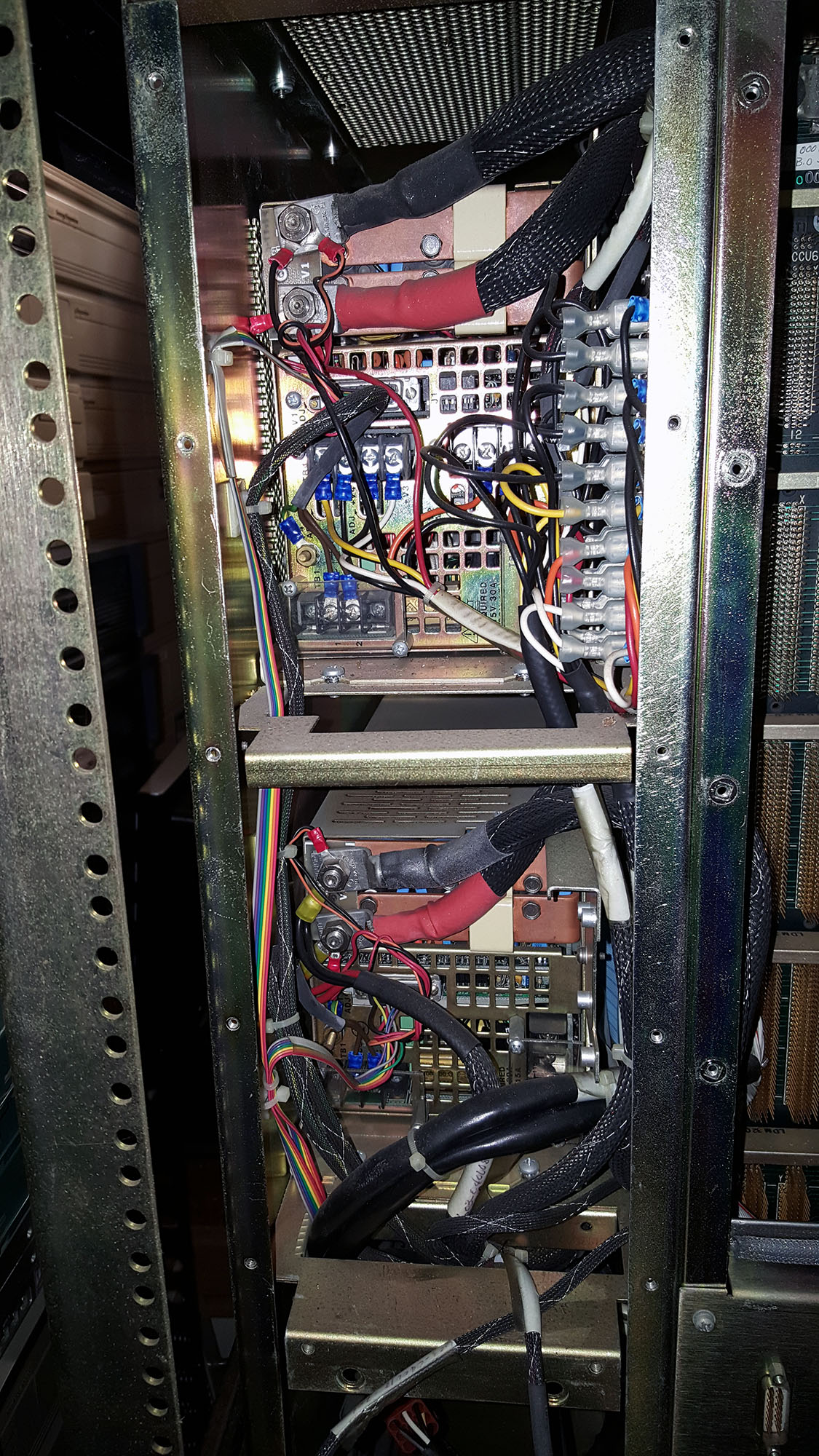 I started with the Convex C1 XL. The XL uses two LH Research Mighty Mite power supplies, the top one delivers +5V, -5V, +12V and -12V, and the bottom one delivers +5V. The top power supply turned out to be just fine (+5V was a bit high, but could be trimmed down), but the bottom one put out 9 volts on its +5V line, with a lot of noise, so this one definitely needs some repairs. 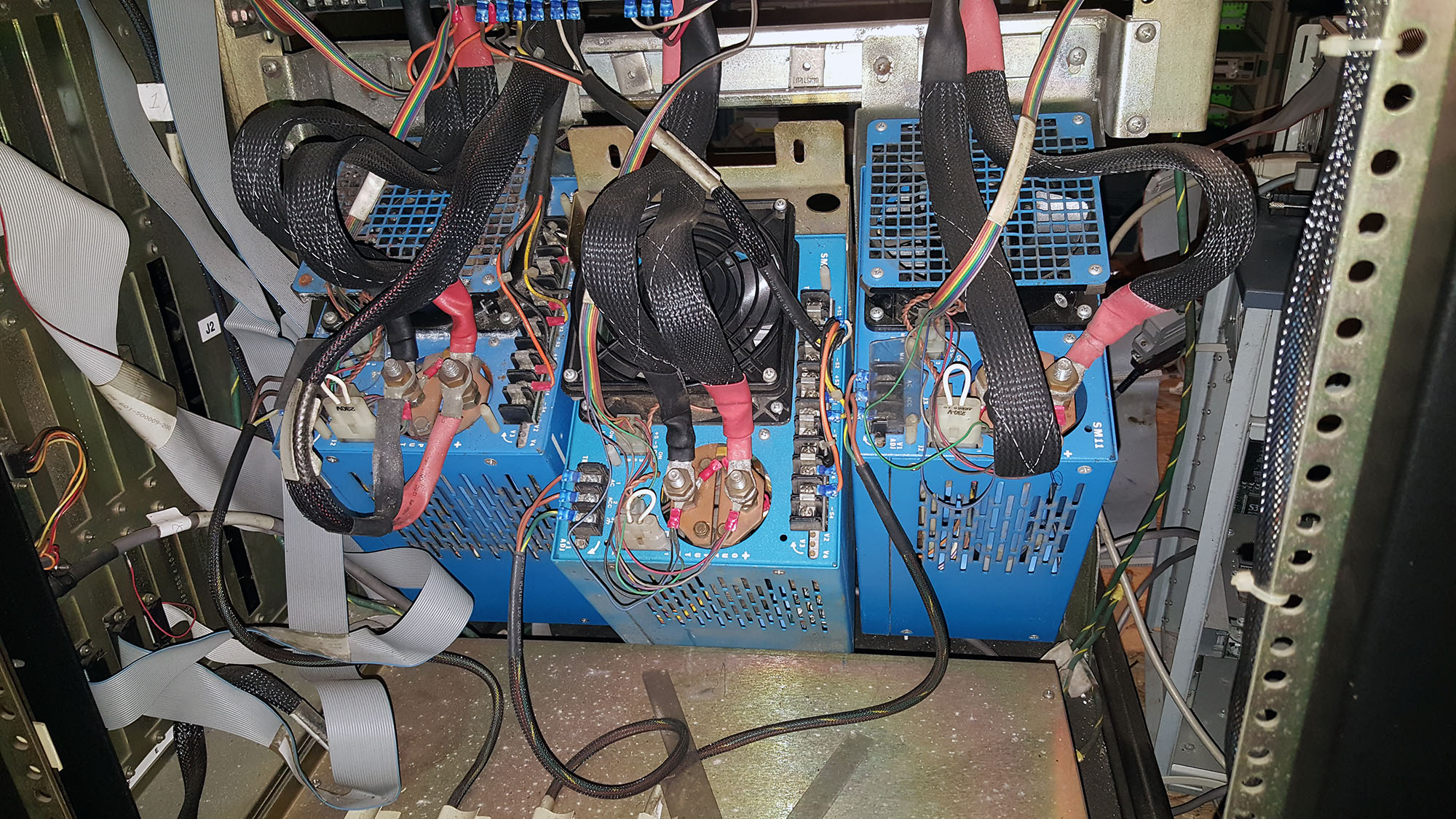 The Convex C1 XP has a beefier power system, with three LH Research Super Mite power supplies, two SM24s delivering all four voltages, and one SM11 delivering only +5V. The SM11 and the leftmost SM24 turned out to be just fine, but the SM24 in the middle was dead. No output at all. This could be a blown fuse of course, but I’ll need to open it up to find out. 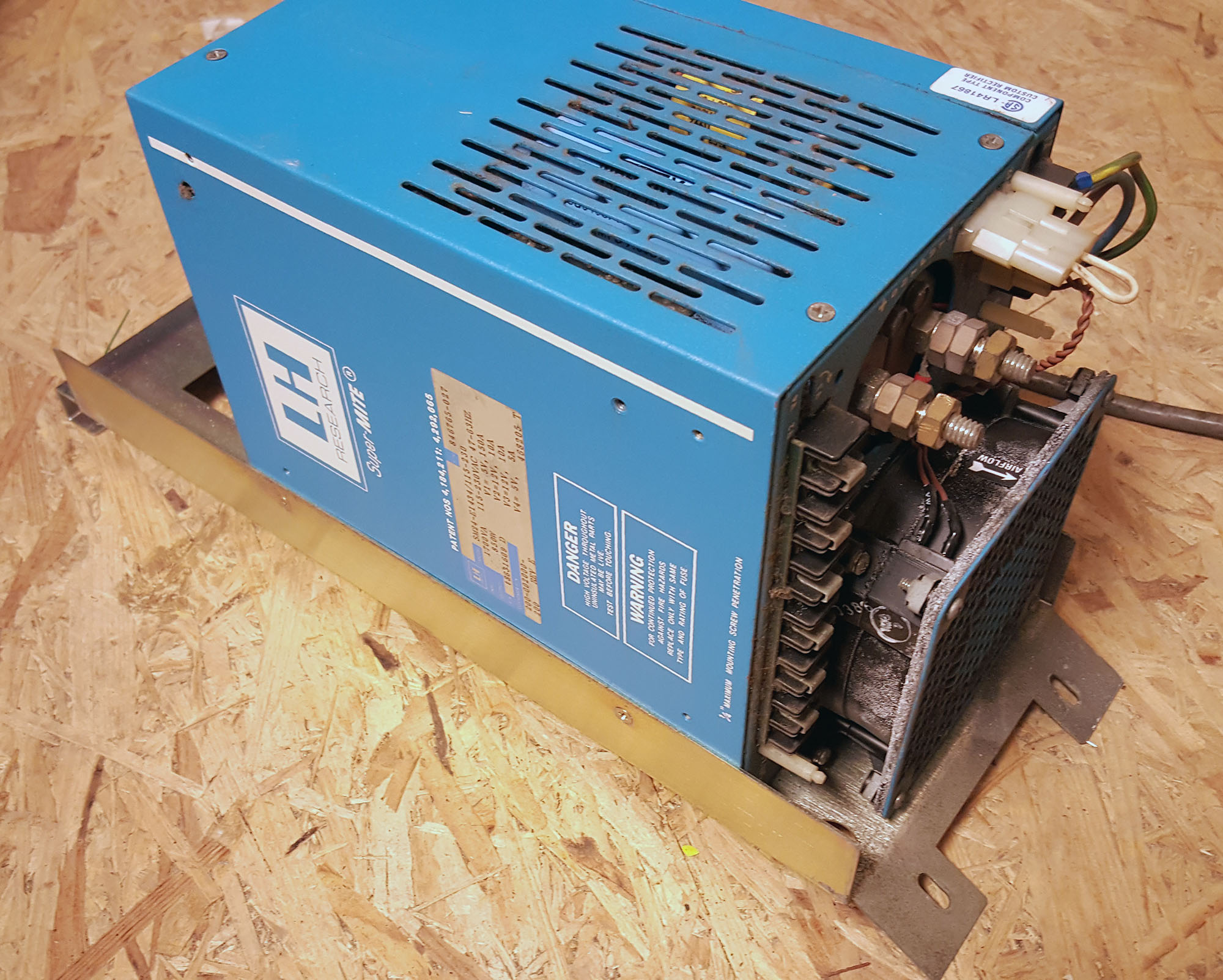 Fortunately, as part of the shipment I received a spare SM24 power supply; it has obviously been used, but when I tested it it turned out to be just fine. So, for now, I haven’t performed any repairs yet, just replaced the faulty SM24 with the spare one. 4 out of 6 power supplies are absolutely fine after 25 years of disuse!

So, I now have a C1 XP with a power subsystem thats completely within specification. The SMB board (sort of a cabinet power controller) shows no errors, other than the “SPU ERROR” LED. 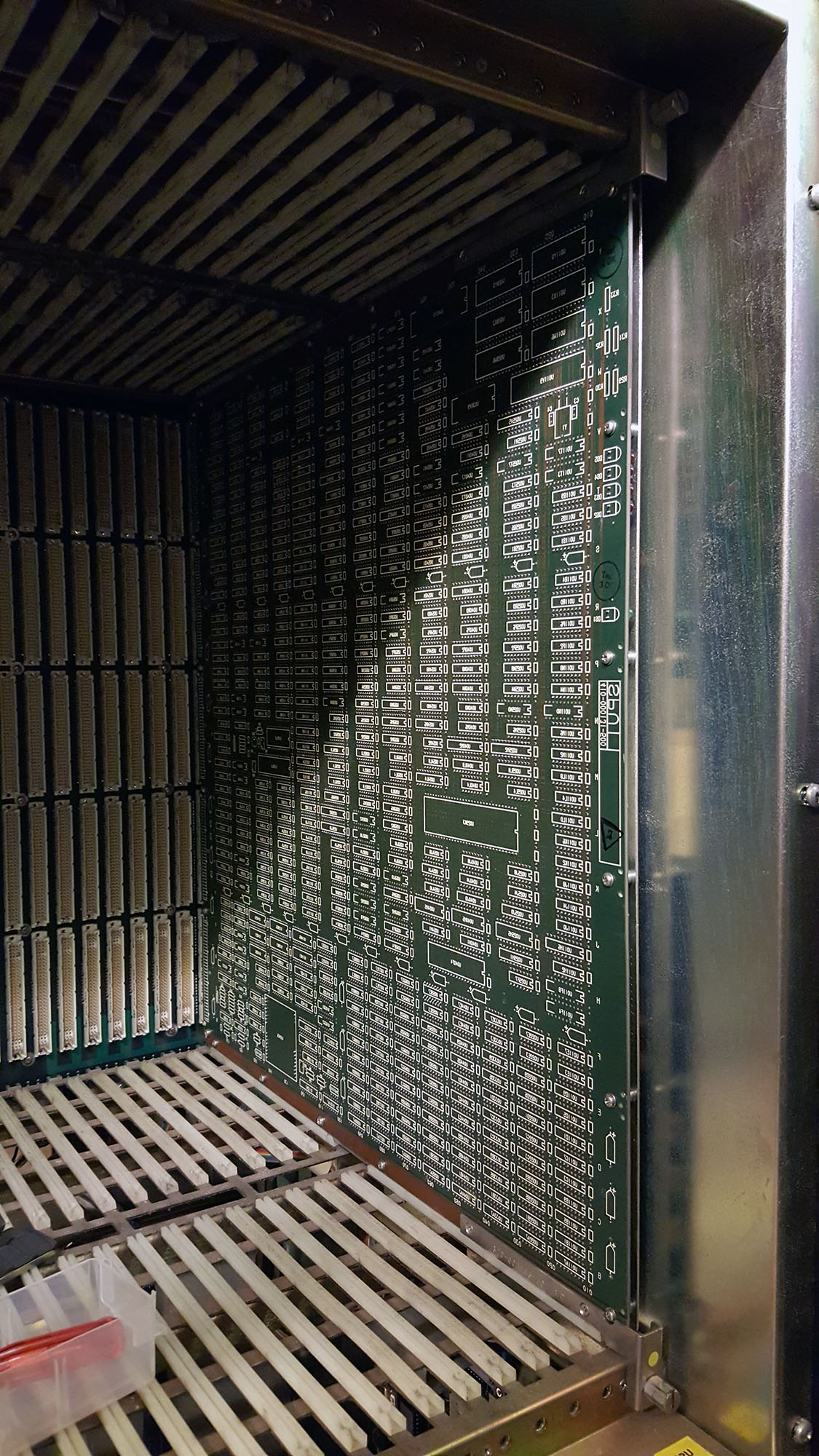 The latter is completely normal, since there’s no SPU (Service Processor Unit) installed in the system yet. So after another verification and visual inspection, I crossed my fingers, and put the SPU into its slot in the backplane. I attached a serial terminal to the console port, and applied power to the system. After a very short initialization, the green OK led on the SPU card turns on, the top LED starts blinking the normal 1Hz heartbeat, and the following output appears on the terminal:

The (fp)> prompt accepts commands (HELP is a good place to start), but of course BOOT fails, because I still haven’t got the hard disk in the system. 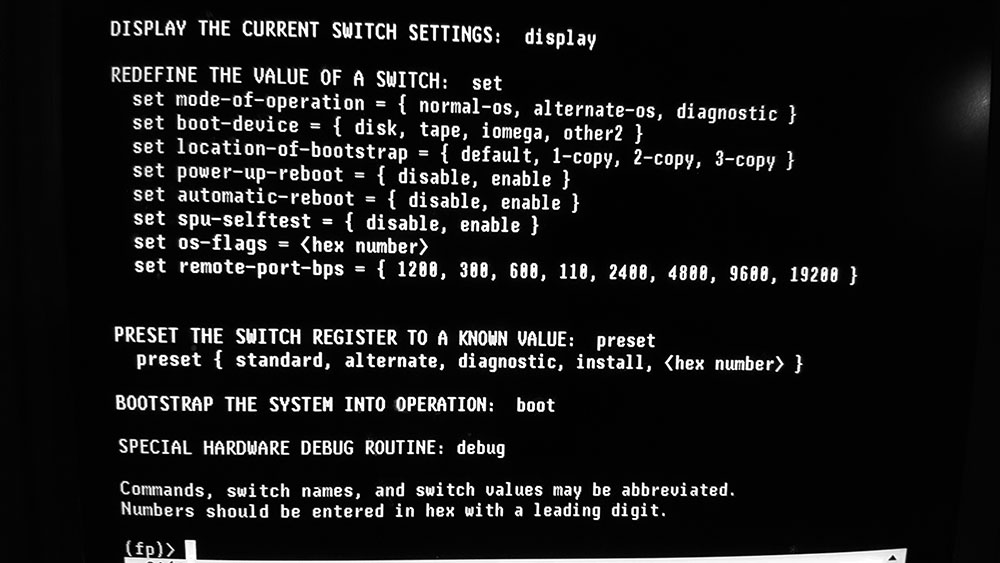 I had taken the SPU hard disk out of the system in order to make an image of the disk. 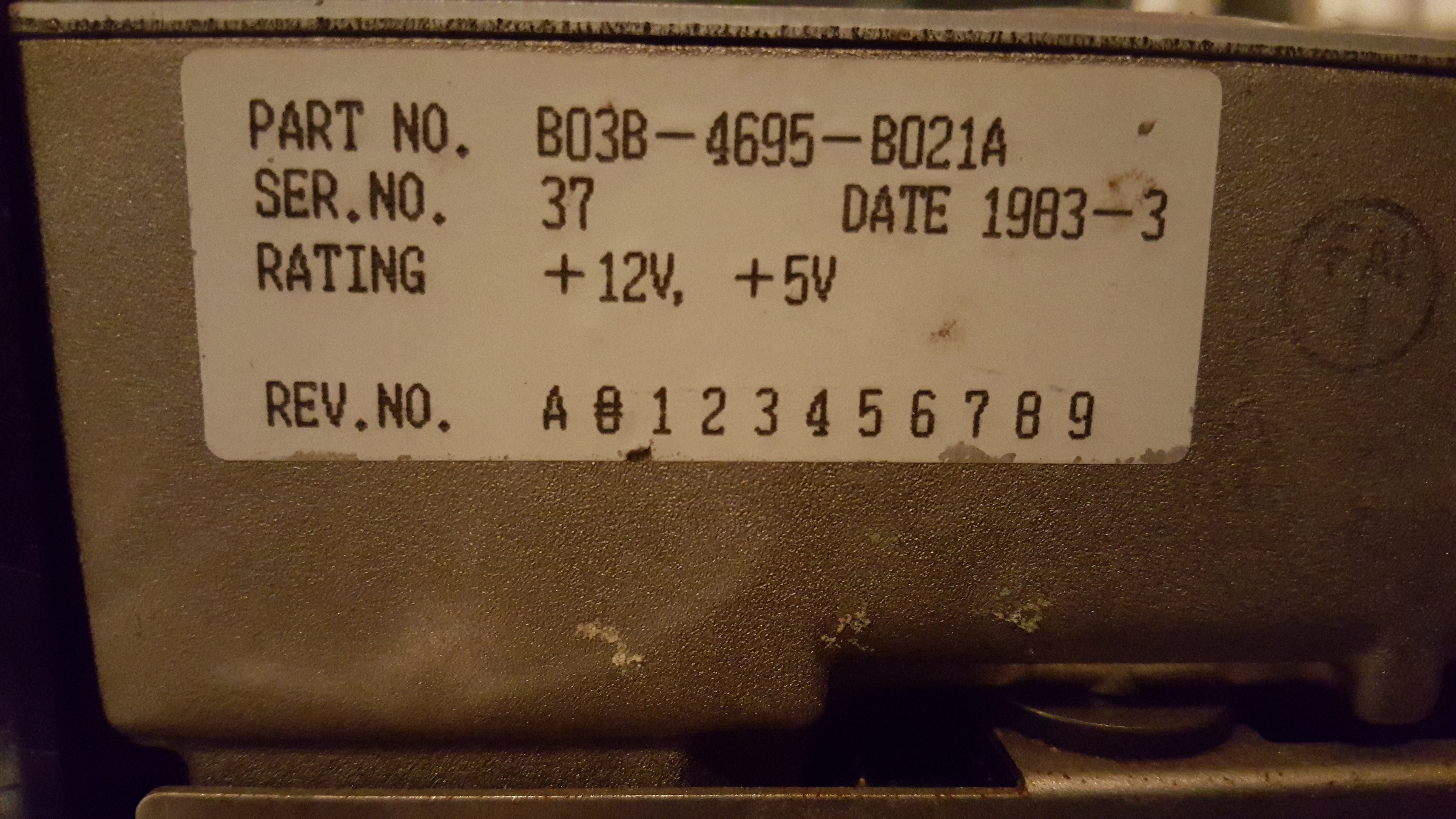 The SPU disk is a Fujitsu MFM disk (with a very low serial number: 37), with an Adaptec SCSI converter module attached. Unfortunately, the Adaptec module doesn’t fully implement the SCSI standard (it doesn’t generate SCSI bus parity, and it doesn’t support the IDENTIFY command), and because of that the systems I’ve tried to use for imaging this disk have been unable to talk to it. So, at a bit of a risk, I decided to put the disk back into the machine, and try to boot from it. Well, SPU Unix does boot, but it requires partition dk0d to be checked, but fsck fails with I/O errors, and I’m prompted to run fsck manually.

I’m a bit puzzled at first, because fsck can’t be found, but of cours on really old UNIX systems like this fsck lives in /etc. So, /etc/fsck dk0d works, but I still get I/O errors. I don’t want fsck to continue, because that might destroy data that’s presently maybe still recoverable. So, time to take the disk out again, and come up with a clever plan to make an image of it. If only I could talk to the SCSI device at a really low level… But I don’t want to write my own complicated driver for a SCSI controller. Well, I should have an Ancot Ultra 2080 SCSI Bus Protocol Analyzer somewhere. I don’t think I’ve used it since we moved here three years ago, so it’s probably still in one of the moving boxes. I unearthed it after a little digging, hooked it up to y laptop over a serial connection, and attached a random 50-pin SCSI hard disk I had lying around. Something with no valuable data on it. I then wrote a very simple program in C++ to talk to the Ancot over the serial port, and instruct it to read data from the attached disk one sector at a time, and send the data back as a hex dump over the serial port. It’s slow (about one 512 byte sector per second), but it works. 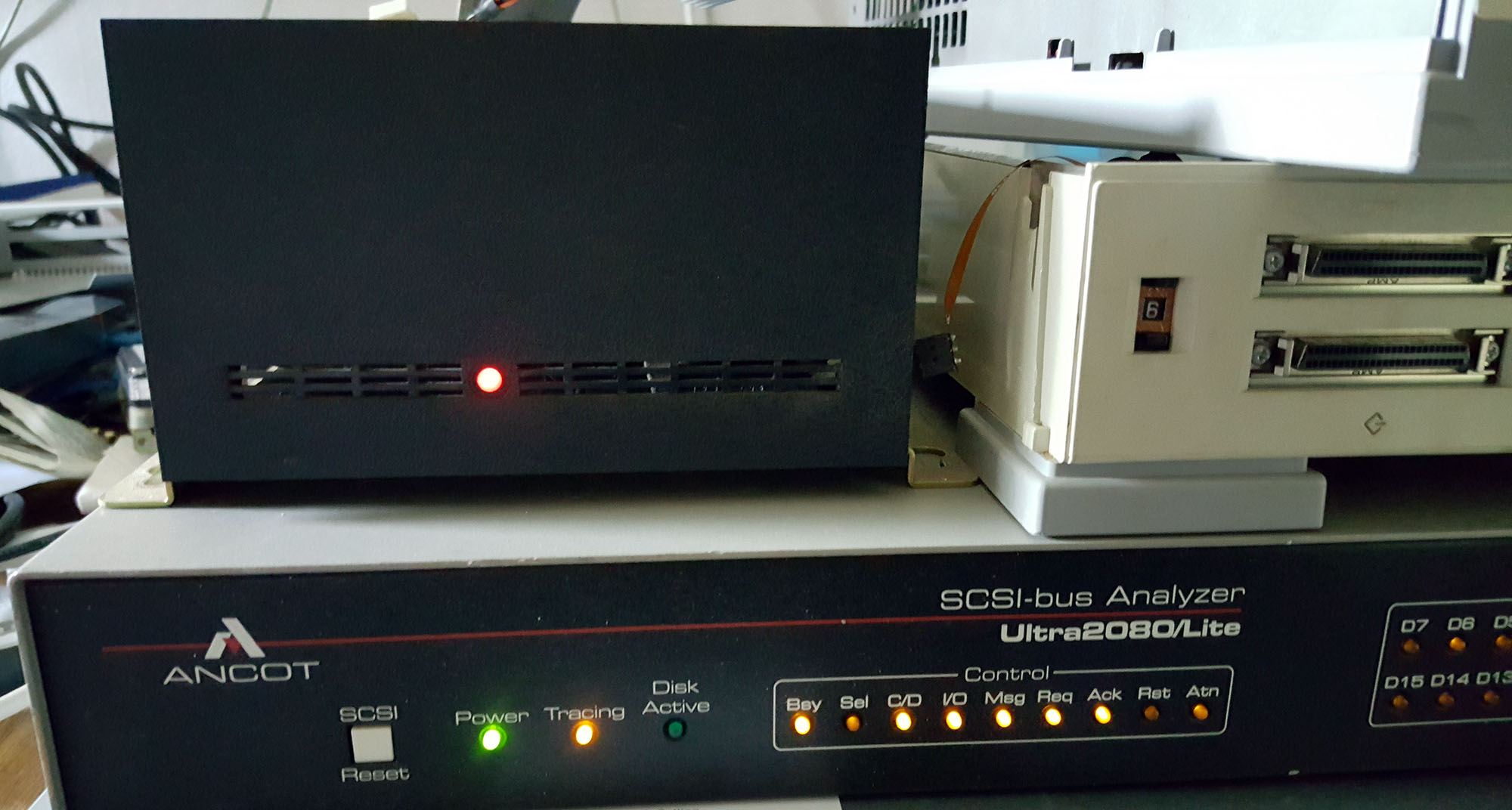 Time to attach the SPU disk, and start reading it. It’s currently still running (for something like 6 hours now), and as I don’t know the capacity of the disk (probably around 20MB) I don’t know how long it will take. I guess I’ll find out tomorrow…

So, the SPU disk is 17 MB in size. Unfortunately, 2656 sectors (or about 8% of the disk!) was returned with an I/O error (mostly error code 0x11, unrecoverable read error). You'd think that unrecoverable read error means the data can't be recovered, but when I tried reading just the failed sectors a second time, about two-thirds of them read just fine, with no error returned. Encouraged by this, I read the sectors that had failed twice a third time, and about half of those read fine. I repeated this something like 20 times (automated it, of course), and in the end I'm down to just 43 sectors I can't read reliably. Fortunately, these are all way at the end of the disk, beyond the last block that's actually used by the filesystem, so it should be fine.

I wrote a program to process all the hex dump files to construct a binary disk image, and wrote that image to a regular SCSI disk; I wanted something fairly new, so it would last a while, so I wrote the 17MB image to a 36GB Fujitsu Wide Ultra 3 SCSI disk, with a converter to 50pin scsi attached. The SPU didn't like that disk, it never saw the drive as ready, and I figured this was probably because the Adaptec converter that was used originally used the much older SCSI-1 protocol, which differs in some subtle but nasty ways from SCSI-2 and later protocols.

I then took an older disk, a 1GB DEC RZ26B-E. Even though those are old, I've come to know them as pretty reliable, and, most importantly, they have a jumper setting that lets them operate in SCSI-1 mode. I wrote the image to that disk in SCSI-2 mode, switched the drive to SCSI-1 mode, and put it in the Convex, and that works. The SPU now boots from the new drive without problem:

Next task: exploring what can be done from the SPU UNIX prompt.